Angled nose makes it easy to push through grass

The Lighter Choice for Roofers!

Designed for roofers that want a lighter sweeper but with all the features of quick clean off, height adjustability and durability.

Designed for use on grass because of its unique “Wrap Around” feature that prevents debris from being wiped off by long grass or weeds. The debris simply snaps around onto the back of the sweeper.

Easily Drop Everything with a Pull of the Quick Release Handle

Debris release handle lifts magnetic housing out of the tray. Debris then drops off the bottom of sweeper.

This is not a cheap piece of junk...

"This is something that when you go around after a job you can be assure it's going to go ahead and pick everything up for you. These things are nice. I'm done with the cheap stuff. I wanted something that's quality. I did a lot of research and looked around and this is the company that I found."
Eric Jopp
Tools in Action

A Push Magnet where every feature has a purpose

On a tool there should be nothing extraneous that doesn’t have a purpose, everything should be for a reason, and form should follow function. The Ecko like all Bluestreak magnetic sweepers exemplifies this.

The five wheel height settings allow you to fine tune the sweeping height to ensure maximum performance in your conditions you normally experience.

The angled front nose makes it much easier to push through the grass, all the pivot points have nylon flange bushings so there is no metal on metal contact, meaning no squeaks, long life, and a nice tight feel to the tool.

And the feature you’ll use the most, the handle, was specifically made three pieces to give the handle sturdiness and durability and also contributes to the tight feel of the sweeper unlike many single piece handle designs on the market. It’s all about the details and the Ecko pays attention to them all.

“Wrap around” feature designed for pushing the magnetic sweeper through grass. The “Wrap Around” feature prevents debris from being brushed off by grass once picked up. The debris just wraps around onto the back side of the magnet instead.

The strength of the magnet and pickup is awesome.

" Once I received the Ecko, I went back over the areas that were already done and I picked up a ton of nails left behind by my bargain sweeper. Right there sold me on this sweeper. While I love the design and wrap around, the strength of the magnet and pick up is awesome."
Eric Jopp
Tools in Action

Adjustable sweeping height from .5″ to 2.5″  to accommodate any situation. Height adjustment allows fine tuning of performance on a variety of  terrains and conditions for optimum performance.

The feature you’ll use the most, the handle, was specifically made three pieces to give the handle sturdiness and durability and also contributes to the tight feel of the sweeper unlike many single piece handle designs on the market.

All moving parts are protected by nylon flange bushings to reduce wear and extend sweeper life.

A performance test to show the pickup height of the Ecko magnetic sweeper. We’re using a 2 1/2 inch nail for the test and the Ecko is picking it up at a 4 and 1/4 inches height.

Specification Details on the Ecko 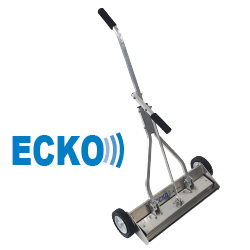 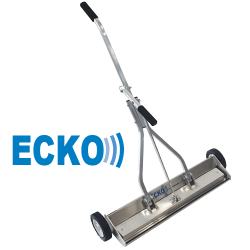 There are no Ecko Accessories